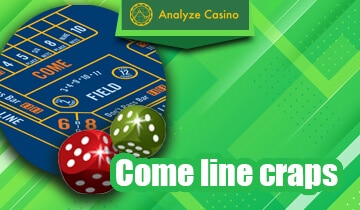 The majority of novice players who dare to start their luck at the craps online table place wagers on the craps Pass Line bet because they have a greater chance of succeeding. You may switch from making Pass and Don’t Pass bets to another multiple-roll betting type known as the Come bet if you want to add some variety to your gaming experience.

As long as players grasp how the Pass Line functions, this bet type is simple to explain. Furthermore, putting just Line bets in a methodical manner can get tedious after a while, as one must wait for several craps dice combinations rolls with results that are unrelated to their wager. As a result, incorporating the Come line craps into your session’s crap field strategy is a smart idea.

Our top casino picks where you can play Craps:

Other bonuses are up for claim:

Get the amazing welcome package at Spin Samurai Casino: Up to €800 + 75 Free Spins!
See moreGet bonus

What Is Come Line In Craps?

The Come line in craps is similar to the Pass Line bet in most ways; the main difference is that players may only lay Come bets after the come out roll of the dice has created a Point. So, effectively, the only time Come bets aren’t allowed is on the Pass Line’s come-out roll. Read on to find out how to win at craps.

How to Play Come Line

The steps below will tell you how to play craps for beginners.

Assume that 5 has been designated as a Point. This is where the number 7 reappears in the game. Gamers that placed a Come bet will win if their Come-Point number, which in this case is 5, is rolled prior to the number 7.

The Come bet is one of the most fundamental and best crap bets craps strategy besides craps hop bets, craps put bet, craps field bet, and horns bet in craps that can be made at a craps table. Because the odds of winning are higher, it pays out even money, which means that if you gamble $10, you can win another $10.

However, because the casino has an inherent advantage, the come bet odds are somewhat skewed at 251 to 244. Nonetheless, the Come bet, together with the Pass Line bets, craps flat bet and craps hardways bet is one of the most rewarding alternatives for gamblers, with a house edge of 1.41 percent.

Single (1x), double (2x), triple (3x), five-times (5x), and ten-times (10x) odds can all be used to support the Come bet. With each rise of free odds bets, the house edge decreases. As a result, combining your Come bet with a free double-odds bet reduces the built-in advantage to 0.85 percent, while a ten-time odds bet reduces it to 0.18 percent.

Let’s look more closely at a Come bet first. On a come-out roll, a shooter secures a point. You put your money in the come box. The following roll is made by the shooter. If he rolls a 7 or an 11, your come bet is a winner right away. If a 2, 3, or 12 is rolled, you are guaranteed to lose.

You can place as many come bets as you like on each roll after a come-out roll. As a result, rather than just placing a single Pass Line wager, you can place few bets at the same time. People with knowledge of street craps rules, would vouch that Come Line Bets usually pay off well.

A Don’t Come line craps bet operates similarly to a Don’t Pass bet. Consider the case where a shooter rolls a point number on the come-out roll. Then, you may place your chips in the Don’t Come box on the layout to make a wager. You’ll be a winner right away if the following roll is a 2 or 3.

If you see the point number rolled before a 7, you fail. Only the point number and a 7 decide whether you win or lose; the rest of the numbers are impartial. In craps tournament strategy, you are free to place as many Don’t Come bets as you like.

Once the point has been determined, make sure to take advantage of the come odds wager. Live Craps odds bets have no house edge and are an effective way to improve your profits in craps. Hardways. Also, craps money management is mandatory so that you do not run into losses. Look up the craps payout cheat sheet to learn more.

Come bets, like Pass Line bets, win if the shooter throws a natural 7 or 11 on the next roll. Come bettors would get even-money rewards if this happened.
The pass bet, which is the most basic and basic wager in craps, is also safer in comparison to other craps bets, with a house edge of 1.41 percent.
On the Come Out roll, Come Bet Odds are dormant until the player calls them “on.”
You can't turn off the initial bet sum again until come bet point is placed, but you may turn off the odds amount at any moment.
The ideal craps strategy is to place bets that reduce the house edge and offer bettors the highest chances of winning. Players should wager the lowest limit on Pass Line/Don't Pass bets, then lay the odds, in order to win the maximum money while maintaining the house edge at low.

Come bets, along with Pass and Don’t Pass bets, are among the most fundamental wagers in a game of craps. These are the best bets for beginners who want to keep it simple and stick to bets with a reduced house edge.

The Come bet, like the Pass/Don’t Pass combination, has a counterpart, the Don’t Come bet, which operates in the same way as the Don’t Pass bet, except that a point must already be created before you may place a Don’t Come bet. You can stay tuned to learn about what is hop bet in craps.