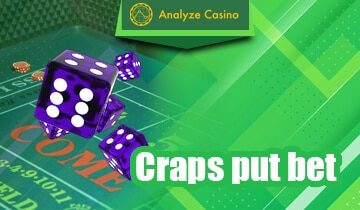 While learning how to play craps online or in live craps, it is important to have an understanding of the variety of bets including craps put bet which we are about to discuss in this article.

Craps put bet is a pass bet placed on a roll which is not a come out.  It was not long ago when this bet was almost obliterated but the casinos decided to offer a higher number of odds in order to get punters to choose put bet over others.

The bet is essential to know about in order to design the craps field strategy.

Top 20 Online Casinos Where You Can Play Craps 2021

Put bets are usually infamous among punters when compared to best craps bets, but these bets come in handy at certain instances where a player is required to back the bets up with free odds. They are usually made after come out which leaves no chance for an initial roll. In case of a craps pass line bet which people are used to, it gives punters a chance to win on the come out whereas opting for put bet makes a punter ready to jump into the game after this establishment of a point. Following that, if the shooter rolls out a number matching the point on the craps table, the punter wins. It is a loss if the shooter rolls out a 7 on the first go.

To understand how to win at craps it is important to acknowledge the significance of different types of bet to incorporate in the craps strategy and also how to increase craps payout by understanding the concept of the craps house edge.

For making a put bet one has to lay the chips the same way he would lay for a place bet but instruct to put the number instead. The position and stacking would resemble that of come line craps bets.

For every point made, the house earns an edge that varies according to bets. Like all other bets namely don’t come bets, horn bets in craps, craps field bet, craps hardways bet, craps flat bet, craps pass line bet, put bets in craps pay money and it is even like pass bets. Since the money that is paid is less than true odds, the house edge for a put bet is 9.1% for 6 and 8 and as high as 20% for 5 or 9. It gets unbelievably high (33.3%) for 4 and 10.

What plays a major determining factor in the house edge is the come-out roll the lack of which can make a major difference. If a pass bet is placed before come out, the house edge is at 1.41 percent. With the come-out percentage as mentioned, opting for a put bet should be avoided. It is possible to support the put bets with free odds just like one can do for pass bets.

Lowering the house edge needs a bet that is over the table minimum. People should stick to pass line craps in their craps tournament if they have a limited amount in their bankroll to play with.

When to use Craps Put Bet

When there is no pass line bet made and the rollout determines a point, utilizing favorable odds one can place a put bet on the pass line. But in this case, the advantages that a player possesses before getting a point are all lost. Hence, it is important for punters dedicated to craps money management to make sure if the casino or the craps app is allowing the odds to be used while making a pass line bet after the establishment of point. To know how to win at craps one has to make himself aware of these rules as well as craps dice combinations.

The even break multiplier is an important strategy to never miss out on at a craps table.

Opting for a bet of $30 will give a profit of $42 if the player wins. Whereas, breaking the $30 into $10 and $20 with 2x odds, will give a payout of $10 on flat and additionally $30 on odds resulting in a total payout of $40. Since the multiplier was not big enough, the punter loses $2 on the same amount of bet, which makes it essential for us to know the even break multiplier which encourages players to make the odds at least 5 times the points of 5, 6, 8 and 9 and avoiding the put on 4 and 10. Although it is not a rule written on stone, it will save a punter from facing major loss.

Advantages and Disadvantages of Put Bet

Just like every coin has two sides there are advantages and disadvantages of every possible thing.

It can be treated like one but requires compensation for the changes instructed to make.
No, the name itself symbolizes bad luck.
All the bets except for come bets, don't come bets, pass line bets, and don't pass line bets are removable.
The payout is dependent upon the odds a player is using and the house edge of the bet for the casino, which makes it variable.
No, a buy bet is a place bet with a 5% commission on the bet amount which differs from the concept of shorting.
For any gambling ventures, it is always a good idea to sell off as soon as you start facing moderate losses. The fall hope of winning big might drag you into unnatural debts.

There are plenty of other bets that are equivalent but more advantageous than craps put bets, especially in craps for beginners. We will discuss top topics like street craps, street craps rules, and don’t pass bet craps in some other article.