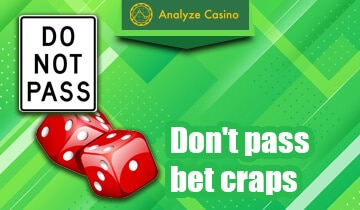 Craps is one of the most popular dice games in casinos around the world and comes in various modes for one to play. Flourished from a western European game, popular in the early streets and formerly called hazard, this game has come a long way to be globally acclaimed and embraced.

Craps invites various forms of betting, amongst which is the crowd favorite, ‘don’t pass bet craps’ – the mesmerizing piece of a game.  With the almighty in heaven’s high dower, and all his splendour in a roll of a dice, you have arrived just to the right place. Because we have all you need to know about don’t pass bet craps –

Each win at a don’t pass bet will amount to an even money payment. On the table layout in some casinos the come-out roll of a 12 is considered a push. A push is actually a tie. However, in some other casinos, the come-out roll of actually a 2 would be called for a tie or a push. In either case, the numbers that would serve as push would be initially marked on the table layout, and bettors would be beforehand informed.

The biggest disadvantage of playing don’t pass bet craps is that there are eight ways to roll a loss, and only three ways to roll a win. If one can make pass the come-out roll to establish a point, the odds of winning comes in their favour as the number 7 is most likely to be rolled.

The don’t pass craps bet has only a house edge of 1.37 percentage, and just like the pass line you are allowed to add free odds bet to lower the overall house edge even more. You place additional money right beside your craps flat bet and you get paid with the true odds.

As mentioned earlier, one can lower the house edge by adding odds and get paid with the true odds. Let’s take a look at what exactly we mean by that:

That is how the don’t pass odds payout is calculated. Also research on payouts for a don’t pass line odds bet in craps for more info.

Importance of Betting Patterns in Craps

For one to succeed and always keep a reasonable amount of money at hand, one must realize the important patterns of betting in craps. A mighty observation, the study of the game, and good maths – that’s basically all you need.

Here’s how a considerable study of the betting patterns in craps should help you in a game,

On the first roll, the probability of winning craps using a don't pass line bet is 4/36. To strengthen your knowledge try and find out why craps is illegal in California.
When you place your chips on the don’t pass line on a table layout, you participate in a don’t pass bet. You can only take part once the puck is in the off position. A come-out roll of 2 or 3 gets you a win, whereas a come-out roll of 7 or 11 brings a loss in don’t pass bet aka craps don’t pass.
When you play in the exact opposite manner of how you would have played in pass it becomes don’t pass. As opposed to the pass bet, a 2 or 3 is a winner, where a 7 or 11 is called for a loser.
Sure, you can take down a don’t pass bet. This is the advantage of playing a don’t pass bet, you can alter your bet at any time you feel like doing so. Learn about the don't pass line and don’t pass odds payout.
Of course, it is possible to increase a don’t pass bet at any given time. That is the specialty of don’t pass bet. Since it is not a contract bet, it can be altered at any time.
It does! Not only does it increase the amount of money you are likely to win but it also brings down the house edge.

So, there you go! This is all you need to know before you roll that one damn dice. Keep your eyes open, and your sentiments curbed – and with the law of nature, you shall come victorious. Don’t hate the game, and don’t you dare hate the player.